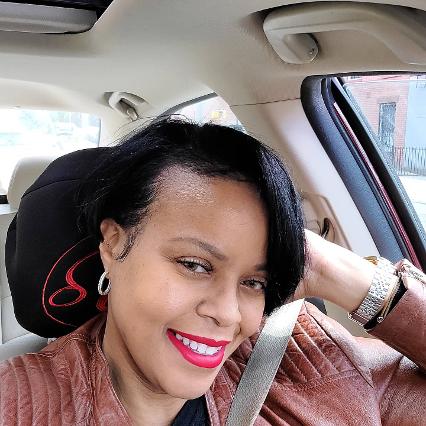 “Fauve-pop with a twist: Is what I call my Art style, it may include imagery from popular and mass culture; such as advertising, comic books, mundane cultural objects and a possible culmination of snapshots that harvest raw emotion of real people, emphasized in a painterly quality of strong bold color in a representational semi-realistic way to invoke an emotion in the viewer. Artistic influences are Steve McCurry, James Rosenquist, Barbara Kruger, Panama’s Kuna Indians’ Mola and Sandro Chia just to name a few."

She has two older brothers, one paternal and the other maternal.  Her father is from Kelics, Jamaica and her mother is from Panama City, Panama. She is the only child the pair had together. Her father later remarried, she also has a paternal sister.

Her Interests in Art sparked from an Art exercise given in the 3rd grade while attending P.S. 139, this simple exercise to recreate a Cezanne painting Mount Saint Victoire, using oil pastels and copy paper.

She eventually experimented with an a ray of mediums and participated in various art exhibitions & shows, later attended Cazenovia College for Advertisement and illustration design, transferred to Florida Atlantic University to receive her Bachelors in Fine Arts and finally attended The College of New Rochelle to achieve her MFA in Art Education.

If you would like to commission a piece first hit the following link: 'Release Form for Artistic Rendering, then you will also need to submit a deposit of $100 and email the photo you would like rendered to: ErikaAndersonArt1@gmail.com, (for additional contact information see and click on the Home link here or at the top of this page)
(save filled out original release form to submit at a later date and time) Thank you!